Barbara Feldman Morse was born in Boston, MA surrounded by a very food-centric, family spending summers at her grandmother’s house in Hull, MA directly across from the Atlantic Ocean. Collecting quahogs for 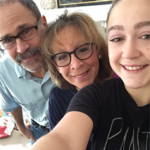 “chowdah”, soft-shell clams for steamers and watching “Nannie” clean huge pails of fresh flounder helped shape her love of fresh ocean delights, a beachy summer lifestyle and more. By the 8th grade she was working at Paragon Park, a classic amusement park at the end of Nantasket Beach. There she learned team work in the kitchen frying clams, scallops, and onion rings and has been cooking and baking in kitchens ever since.

After receiving her B.A. in Anthropology from the University of Massachusetts she drove across country to visit San Francisco and stayed about 14 years. She became the designated baker wherever she worked, for friends, a film or two and developed her award-winning recipe San Francisco Fudge Foggies for Chocolatier Magazine and Ghiradelli Chocolate. It was in San Francisco that she found her first madeleine pan, love at first sight! It was the beginning of her devotion to the French-inspired shell shaped cakelets. Baking wedding cakes, desserts for catered events, theater groups and restaurants evolved into her business “Cocoa Beans” after moving to Putney, Vt. Her dark chocolate cakes were mailed to Ted Williams in Florida and she baked madeleines for then Governor Madeleine Kunin.

Baking for local Starbucks stores, inns, restaurants and mail order inspired her to develop many recipes including a collection of innovative Madeleine recipes. A well-worn notebook filled with formulas for ‘the new madeleine’ was the foundation of her recently published cookbook, “Madeleines”, October 2014, by Quirk Books.

She has a passion for sharing her recipes with seasoned and novice bakers alike. Developing a very easy “one-bowl method” for most of the madeleine recipes has been a fantastic way to lure shy bakers into the kitchen assuring them of success.

She encourages everyone to put on an apron and “Make Way for Madeleines”!